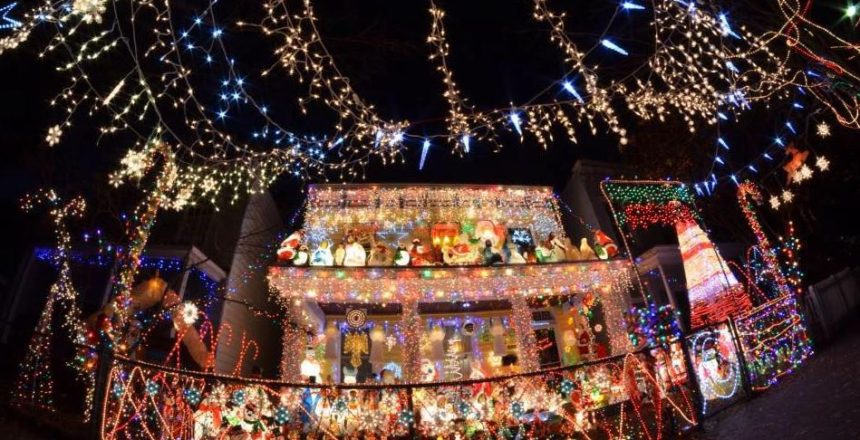 Rudolph’s shiny nose will have some competition this Christmas in Richmond, Virginia. That’s because he’ll be pitted against the city’s Tacky Light event, which will be merry and bright. We’re talking supernova-bright.

The Tacky Tour, a 30-year-old Richmond holiday tradition, is a utility company’s dream-come-true: houses entwined in yards and yards and yards of lights, along with countless figurines, ornaments and moving parts.

How Did Tacky Lights Tour Begin?

The tour was created in the 1980s by a local DJ called Mad Dog (Barry Gottlieb). Rolling through the first tour in a Winn Transportation bus filled with sightseers, his spectacle featured 12 houses.

In order to launch the tour, Gottlieb checked out the neighborhood for houses with the most over-the-top decorations. In 1987, 11 kitschy homes became showpieces for the first tour. Since then, decorations have become more and more fuse-blowingly excessive.

Back then, a house qualified for the tour if it had a minimum of 10,000 lights. Now, a house can’t be included if it falls short of a whopping 40,000 lights.

How Do They Set up the Lights?

Hazardous lights, high bills, elaborate decorations. How do these people even make it through Christmas?

Some homeowners use LED lights in their displays. Although LEDs cost a little more, they save money long term by using up to 80 percent less energy, and they have a four-decade lifespan. Many of the homes will be giving shows from November to January 1, so that’s still a hefty chunk of change that they selflessly invest in their neighbors’ enjoyment.

Other families install multiple-socket, heavy-duty outlets to bear the electrical load. Some are so fanatical that they even rewire their houses with a circuit solely dedicated to their elaborate displays.

What Houses Are on the Tour?

Previously, there were about 50 houses on the tour. Due to the COVID crisis, there will be fewer homeowners participating. However, it will take place. Like the Grinch, it’s not going to steal Christmas.

All homes on the tour are masterpieces of artistry, gaudiness, and whimsy. Here’s a sampling of these bedazzling abodes.

Put your sunglasses on when you look at these two houses! The two adjacent structures are wired with a monumental 1,500,000 lights total (looks like they made the 40,000 light quota). Owners Robert and Bobbie Phifer have been participating in the Tacky Light Tour for 46 years.

The home’s astonishing spectacle has made it one of the most popular houses on the tour. The lights take two-and-a-half months to hang, and Robert says that the decorations are made of about half a mile of electrical wire.

This house is studded with 750,000 lights. The residents have been decorating their house for 15 years. Their lavish ornamentation includes animatrons, trains, and a lifelike village.

This cool blue house has a whopping 106,000 lights. Its other calling card is an animated light show set to music. Fans choose the songs they want to hear, and the winner’s song plays next.

1925 W Laburnum Avenue is the place to go if you want to see 95,000 lights. A whopping 13,000 of them adorn two artificial trees. The roof is topped with a Bethlehem star, and the display is crowned with almost 60 monolithic lighted snowflakes.

How Can I View the Tacky Lights Tour?

There’s nothing like experiencing the sheer sensory overload of seeing these spectacular creations up close. In light of the pandemic, though, some people won’t be lighting up their homes this year.

Some are trying to compromise. Albert Thompson of Wendhurst Drive is one of them. He has put up signs indicating that there can be no more than 25 people viewing his house at a time. If that grows to 26, then lights out.

Is There a Less Risky Way to Enjoy the Tour?

Masks and social distancing are very effective for impeding infection. However, keeping in mind that the tour draws many people, it could be very difficult for a homeowner to limit the number of viewers. It could also be difficult to enforce mask-wearing.

A better idea? Rent a limo with a private chauffeur. It’s a much safer alternative to the health risks of traveling in groups. You’ll also stay warm and cozy, and you can even comfortably nibble on a snack, sip a drink, listen to music, and enjoy the limo’s other amenities. Your private chauffeur may even be literate in tackiness and be able to take you to the best light displays!

The Tacky Light Tour is one of Richmond, Virginia’s stellar attractions. Even though it’s called tacky, it’s quite magical. All in all, it’s a very bright idea!